I'm learning how to throw ceramics on a wheel.  We're a few weeks into class and I finally managed to get the "cylinder" in the picture.  It's the first shape I made completely on my own.  There are two other cylinders of mine in the damp room but they both had significant aide from the teacher.  There is even more clay in the recycled clay bucket...

During the first couple weeks of class I could feel my frustration rising as I couldn't make the shape I was aiming for.  Then, somehow last Monday the ideas finally started to gel a little bit.  I'm hoping that when we learn to trim I can clean up the bottom of this pot.

There's a pretty high level of concentration and balance  involved in wheel throwing.  More than that, what I'm struggling with is not letting the clay push me around.  People who throw make it look incredibly easy but there's an amount of firmness that you have to be able to hold on to in order for the clay to not become a wobbled shape.  At the same time you can't push beyond the point of holding still otherwise you wobble the entire piece in the other direction.  Luckily, I've been taught a couple of saves--otherwise, I never would have gotten the shape in the picture.

I feel like my life is spinning in much the same way as the clay on the wheel.  And that I'm handling it in much the same way that I'm handling my pieces.  For the first couple of weeks I'd keep trying and keep pushing the clay until it was useless.  Over doing it.  Then I've backed off and it's been just the same problem but in the other direction.  Finding a balance to keep the walls of the clay straight and being able to pull it up so that it's taller has been difficult.  In much the same way I'm not sure I'm balancing my life right at the moment either.  Things are happening fast and I feel that I'm only just barely keeping up.  But, at the same time, the walls haven't fallen and so I feel rather "full" and happy with how everything is going. Just like class though, I'm waiting and anticipating that one little push or pull in the wrong direction and I'll just wobble right in to something dysfunctional.

I've been at my aunt's place for a couple of weeks now.  I like it there.  Getting used to the ridiculous commute was no fun.  First it took an hour and a half every day to get to work.  I'd try to leave earlier and it would just be worse.  So, I tried leaving later.  I've found a balance in that. Leaving later gets me there in about an hour (sometimes less).

Work is fine.  I'm trying to balance my lack of motivation with my ethics about being at a job.  I'm paid to be here so I better get my work done.  I'm grateful for the job even if I'd rather be doing almost anything else.  That said though, I DO wish I was doing something else.

Outside of work my life feels jam packed with a million things--but really, I don't know if it's all that much after all.  Maybe I'm never going to be satisfied even if I'm constantly running.  Mondays are ceramics, Tuesday is a class on Buddhist meditation (but we're on break), I have an online anthropology class (which I am just loving), weekends I still should be riding, and I really need to find a way to incorporate exercise, meditation and yoga. 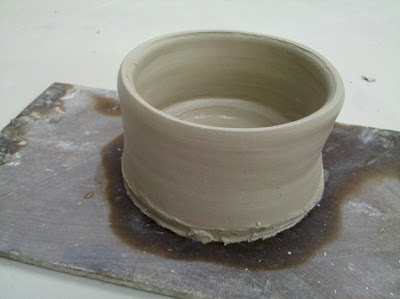 Part of me, I think, is avoiding my relationship.  In order to cope with how much I feel is lacking and how hard the distance is and the impending separation that is coming whenever he leaves for S. Korea, I'm immersing myself in all of these activities that keep me occupied.  It's taken it's toll.  Part of the reason I think the boy and I have worked so well is because I've been so available.  Now, without that constant availability (I'm either at work, at class, or in between...with no Internet at home too) I feel like we talk even less.  But, it keeps me away from dealing with feelings I'm not necessarily feeling prepared to deal with.  It's all a part of the spinning, I guess.  My relationship is the air bubble that will eventually end up coming to the surface.. I'm sure.

Overall though, I'm really content with all of this stuff that I've got going on.  Being more active outside of work is certainly making work less of a drudgery in my day and being absolutely exhausted all the time has really done wonders for me sleeping through the whole night.

Hey-o! Random person here.
You shouldn't let a relationship stop you from accomplishing your goals of school or moving to L.A., especially if he's moving to S. Korea! Do what you want. It's your life. Things will work out either way.

Except.. that part of me wants HIM and for him to succeed at his goals just as much as I want to achieve my own. But yes, in general, yes.

But are you a part of his goals?

Don't prioritize someone who doesn't seem to make you a priority. Move to L.A. and do what you want. You talk about your friends advocating for themselves, so advocate for yourself and do what's in your best interest, not waiting around for some guy in some relationship you seem to be avoiding.

Sorry if this sounds to nosy or pushy, I just get frustrated by women who don't do what they want in their lives because of a guy or a relationship.

Ah honestly I think I am part of his goals but it's contextual too. He's been out of work for years, at this point, you take what you can take. BUT, I agree with you too and I get so irked by girls who do what I'm doing. It's always different based on the situation but not to worry, I am definitely pursuing my dreams full force. LA actually fell off the list and my top choice is in the Bay Area, looking to sign a year lease and making strides to get in a better job. If he and I are going to work it out it will get worked out one way or another but I DO want my masters in Marriage and Family Therapy and so it's going to happen. =) Thanks for the support--much appreciated.

Definitely don't mean to come off as not following what I want, I just spend a lot of time waffling before I buck up and go for things.

Have you heard of the song "No Scrubs" by TLC? No job for years! Girl, what are you thinking?

Short ribbing aside, I'm glad to hear you're doing what you want. That's very exciting :) And I like that term...waffling. I think I'll try and use it.

Hah! I should have clarified. Out of full time work. He's a teacher, doing sub work most of the time. With budget cuts and the like he hasn't landed a full time job because they're busy laying people off.

=) thanks for the support and have fun with "waffling!"